Web site
Directions to and from Exploratorium 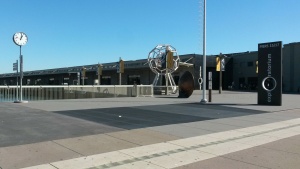 F-Market & Wharves line has stops along the Embarcadero at:

The Ferry Building (with service to Oakland, Alameda, Larkspur, Vallejo) is less than 1/2 mile south of The Exploratorium.

The nearest stop for BART and Muni Metro is the Embarcadero Station, slightly more than 1/2 mile (9 blocks) south of the Exploratorium. F-Market & Wharves historic streetcar also provides connection between BART/Muni Metro and Exploratorium.

Bus stops are located within a few blocks from the museum: