Web site
Directions to and from Moscone Center 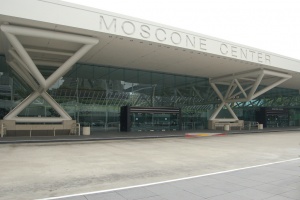 Moscone Center is within walking distance from Union Square and the San Francisco Financial District.

The nearest cable car stop for Powell-Hyde and Powell-Mason lines is at Market and Powell, above BART and Muni Metro Powell Station.

From either the Ferry Building or Pier 41, transfer to F-Market & Wharves streetcar to reach Moscone Center.

Downtown is served by various bus systems from the North Bay and the Peninsula. Golden Gate Transit and SamTrans buses stops along Mission St. Buses from the East Bay stop at the Transbay Transit Center further north.