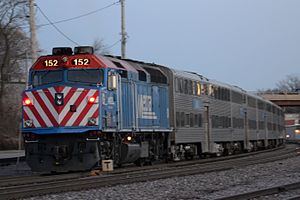 Metra is a commuter rail system connecting the suburban communities in the Chicago area with the Chicago Loop. Metra connects with Pace and CTA buses as well as the 'L' trains.

The system consists of 11 lines named after the railroads these trains operate on:

How to take Metra

Train fares can be purchased a stations with ticket counters during available hours, from ticket vending machines, through Ventra mobile app, or onboard the train from conductors.

Fares vary according to the number of fare zones traveled.

Off peak and weekend Metra trains allow bicycles onboard. Bikes are stored in the ADA car (signified by blue symbol outside the rail car) on the lower level flip up seating area. Up to 5 bikes are permitted on an ADA diesel rail car and 2 on an ADA Metra Electric car. See train schedule or check with Ventra app to see which trains allow bikes and how many they can accept.

Bring your own bungee cord to secure bike to the seat railing.

If the cyclist must disembark due to overcrowding or use of space by disabled passengers, the customer will receive a cash refund if paid onboard, or have their ticket marked "Good for One Additional Ride."

Accessible stations have accessible parking, ramps and/or elevators, and electronic signs. Some stations are considered partially accessible with access to platforms but not all the facilities such as waiting room or ticket counters.

On diesel lines, trains will have at least one lift equipped rail car. Suburban stations have marked accessible boarding areas along the platform where the lift can be deployed. The conductor will provide boarding assistance. Each lift equipped car also has an open/flip up seat area for wheelchairs.

On the Metra Electric line, trains have level boarding, but due to platform gap, use of bridge plate is required and will be deployed by the train conductor. All cars on that line are accessible.