Directions to and from Indianapolis Union Station  |  Nearby 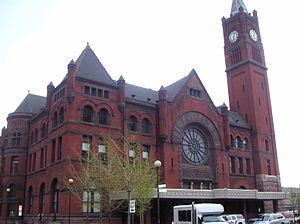 Completed in 1853, Indianapolis Union Station is the first "union station" in the United States. Most of the station has been re-purposed for non-transportation use during the 1970s and 1980s after the heydays of railroad travel. The station still serves as an Amtrak station and an intercity bus terminal. The entrance to the waiting room/ticket counters for the train station/bus terminal is on the south side off South Street, opposite to the historic grand hall on the north side.

This station is served by Cardinal trains. Tickets sales and waiting room are available at this stop.

Parking is available at this station.