Web search 🔍
Directions to and from O'Hare International Airport

ORD is one of the busiest airports in the world. It is a hub for American and United Airlines. It is also served by many international carriers. 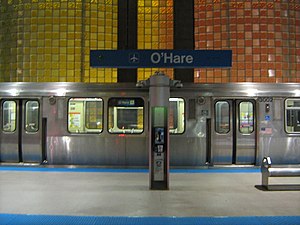 The main 'L' stop, O'Hare Station, is located by the main parking garage located outside of Terminals 1, 2, and 3. Pedestrian tunnels link between the terminals and this station. The   Blue Line links the airport with the Chicago Loop and operates 24 hours a day. Trains run every 3-8 minutes on weekdays during peak hours and every 7-10 minutes midday and evening.

To reach to/from Terminal 5 (most international carriers and all international arrivals except from Canada), take the ATS between terminal 3 and 5.

Pace buses do not serve the airport terminals. They stop at the Lot E ATS station.

Buses pick up and drop off at the Bus/Shuttle center by the main parking garage located outside of Terminals 1, 2, and 3.