Web site
Directions to and from Vivint Smart Home Arena 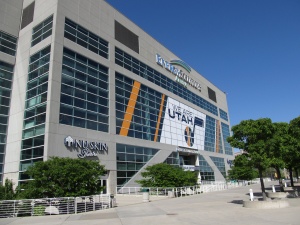 Located in Downtown Salt Lake City, this is the home for Utah Jazz basketball.

FrontRunner is a regional train line between Ogden and Provo. The closest stops are:

Buses are free when traveling within the Free Fare Zone in downtown. When boarding a bus that is heading away from downtown, tell the driver that you intend to get off in the free fare zone. Additional buses also serve Salt Lake Central Station but do not serve other downtown stops.