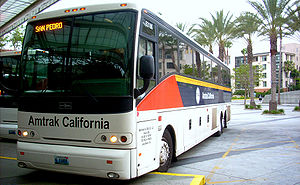 Amtrak Thruway is a bus network to support Amtrak train routes. Its main functions are to connect cities off the train route (San Francisco and Emeryville, Eureka and Martinez), and to fill service gaps between the Amtrak routes (e.g. Bakersfield and Los Angeles, San Jose and San Luis Obispo). Because Amtrak trains run on tracks mostly owned by private railroads, Amtrak cannot operate trains when and where track capacity is constrained.

By California law, except Santa Cruz, Monterey, and Highway 50 routes, Amtrak bus tickets can only be purchased as a part of a train trip. It is possible to buy a train-bus ticket from Los Angeles to Wasco Station (one stop on the San Joaquin train from Bakersfield) and only take the bus from LA to Bakersfield.