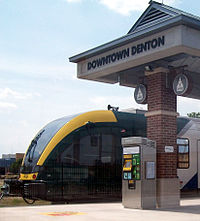 Hybrid rail is a newer form of rail transit combining characteristics of light rail and commuter rail. The development of hybrid rail is prompted by the desire to use smaller, lighter weight (light rail or streetcar like) diesel multiple unit rail vehicles on railroad corridors. Traditionally, federal regulations require the use of heavier trains (FRA compliant) on railroads due to safety concerns of heavier trains colliding with lighter weight trains.

As regulations, adoptions, and technologies continue to evolve, the definition of hybrid rail and distinction from similar modes like light rail and commuter rail are likely to evolve as well. Prior to the addition of the mode by the USDOT, currently classified hybrid rail would fall under either light rail or commuter rail.

As hybrid rail systems are recently built, they feature level boarding at all stops for all doors.