Directions to and from Pioneer Place/SW 5th Station  |  Nearby

This platform is located on 5th Ave and is served by southbound MAX   and   trains. Northbound trains stop on the platform a block to the east on 6th Ave (Pioneer Courthouse/SW 6th Station). This area is a major transfer point between MAX lines with several stations. 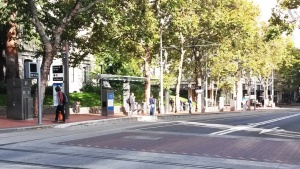 Ticket machines and Hop Fastpass readers are available on each platform. Buy ticket or tap card before boarding.

This is the transfer point for   Red Line and   Blue Line trains at Pioneer Square North (westbound) and South (eastbound) stations, which are located a block to the west around the street corner.

This station is located in the Portland Transit Mall, with buses stopping at various locations along 5th & 6th avenues.