Web search 🔍
Directions to and from Uptown Oakland 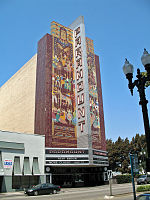 Uptown is the northern part of Downtown Oakland and many restaurants and entertainment venues are located in the area.