Directions to and from Chicago Union Station  |  Nearby 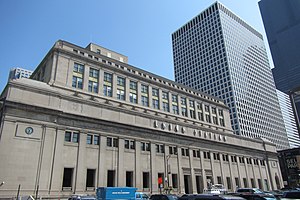 Union Station is the Chicago terminus for many Metra and Amtrak trains. It is one of four Metra terminals in the Chicago Loop area. The others are Chicago Millennium Station, Chicago LaSalle St Station, and Ogilvie Transportation Center, which are within a 15-20 minute walking distance.

Entrances from streets are located along the perimeter of the Great Hall and by the Chicago River at Adams and Jackson. 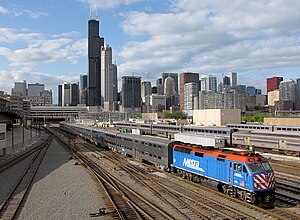 The Union Station is the busiest terminal among the other Metra terminals in the Loop area.

Metra ticket counter is located in the concourse. A $5 surcharge is applied to tickets purchased onboard Metra trains when boarding at this station.

Burlington Northern,   Heritage Corridor, and   Southwest Service lines board from tracks on the south side of the concourse (even track numbers from #2 to #30).

Monitors by the platform entrance and throughout the station show the track number and time for departing trains.

Chicago is 4th busiest Amtrak stations in the country. It is a hub for trains to and from the West Coast and the East Coast.

Amtrak ticket office and QuikTrak machines are located in the Great Hall. Riders on long distance trains (and other trains that require a reservation) need to check in and receive a boarding pass to board the train. Baggage check in is located in the concourse area.

Business class and Sleeping car customers can use the Metropolitan lounge near the Great Hall. Seniors, families with young children, and active duty military personnel can use the south boarding lounge in the concourse level. Other passengers wait in the Great Hall with their assigned boarding group and be directed by station personnel to the platform.

The nearest 'L' stops are Quincy Station         (located 3 blocks east across the Chicago River) and Clinton Station   (located 2 blocks to the south).

Neither stations are wheelchair accessible.