Directions to and from Chicago Millennium Station  |  Nearby

Millennium Station is the Chicago terminus for Metra Electric and South Shore Line trains. It is one of four Metra terminals in the Chicago Loop area. The others are Chicago Union Station, Chicago LaSalle St Station, and Ogilvie Transportation Center, which are within a 15-20 minute walking distance.

Entrances from streets are located at the southwest corner of Randolph and Michigan, with connection from the underground Pedway. There's another entrance at the north end from Lower South Water Street and 233 N Michigan Pedway that only leads to Metra platforms. 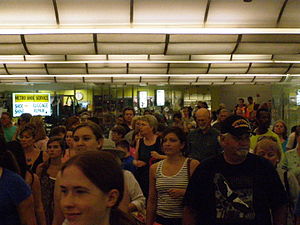 This station is served by   Metra Electric trains.

Metra waiting rooms are located on the north side of the Randolph Street station concourse and at the South Water Street entrance. Ticket counters are available at both locations.

Stairs and ramps connects the Randolph Street waiting room with platforms below, while the waiting room at South Water Street entrance is by the north end of platforms. Metra has 6 tracks and are numbered from 1 to 6 from west to east. Monitors in the waiting room and platform entrances will show the train number and departure time.

A $5 surcharge is applied to tickets purchased onboard Metra trains when boarding at this station. 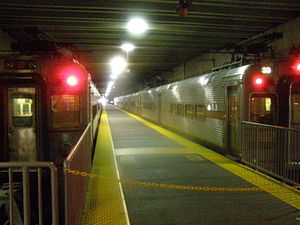 This station is served by the South Shore Line trains.

The nearest 'L' station is Washington/Wabash           located two blocks away.

Lake   and Washington   stations are located two and three blocks respectively to the west. Both stations are underground and can be reached from this station via the Pedway system without going up to the streets. All of the 'L' stations mentioned are accessible.