Directions to and from King Street Station  |  Nearby 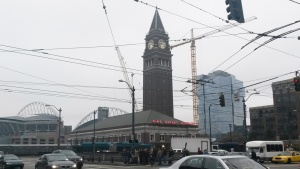 King Street Station is the main commuter and intercity train station in Downtown Seattle. It is half a block away from Transit Tunnel/Central Link International District Station. 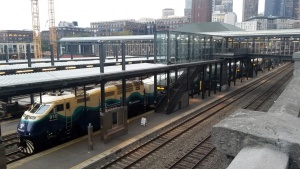 Sounder trains use Track 1 (to Everett) and 2 (to Lakewood) at the King Street Station. The train platform can be accessed from Jackson street or 4th Avenue at Weller Street (overpass). Ticket machines are available on the platform. Purchase ticket before boarding. ORCA card holders must tap card at a yellow reader at platform entrances before boarding. 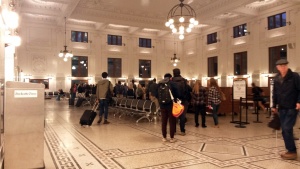 The main station building can be accessed from South King Street (no direct access from Sounder platform entrances). Amtrak ticket office and checked baggage service are available. All Thruway buses stop in an area on the west side of the station building.

Street level buses only. Additional (Downtown Transit Tunnel) buses stop at the International District Station, which is located about half a block east from this station.

Link Light Rail to SeaTac Airport, UW, and other downtown destinations stop at the International District Station, which is located a block east from this station.