Directions to and from Fruitvale Station  |  Nearby 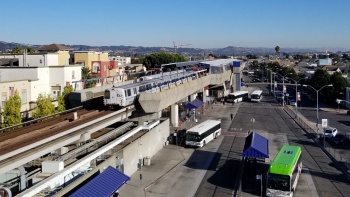 This station features side platforms. See sign for destination before heading to the platform.

When transferring from BART, you can get a free BART to bus transfer before leaving the paid area. The transfer provides discounted one way fares on AC Transit.

Line 1T stops on International Blvd. All others stop at the bus plaza.

To pay the daily parking fee, remember your space number, enter through the faregates into the paid area and pay at an add fare machine or with BART mobile app. Parking gets full at the station by 7am.

Paid private commuter parking is also available next to the Fruitvale Village between 35th and 37th avenues.

A staffed bike station is available at the Fruitvale Village. It is operated by Bike Hub.