Intercity buses provide long distance service between major metropolitan areas, or between major cities and rural communities. It is a mode that competes with intercity trains like Amtrak and airlines, yet also serves as a essential connector for both modes. 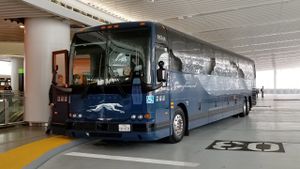 Mainline intercity bus is a legacy service carried from an earlier era before the interstate highways. The bus would travel across major cities with stops in rural towns in between. Greyhound is the dominate mainline carrier (with other independently owned regional carriers covering parts of the mid-west and plains states).

Mainline/rural connection service has been reduced significantly over the decades as laws have changed to deregulate the intercity transportation market (including bus, rail, and air) and carriers began to abandon unprofitable routes. To address the reduction in rural service, the federal government has instituted a grant program: 5311(f) to subsidize rural intercity buses. Some of those 5311(f) funded routes are operated by public transit agencies, or through private companies including Greyhound either under the companies' brand or through a unified regional brand like the POINT in Oregon or Bustang in Colorado.

A key characteristic of the mainline network is that the regional mainline carriers and most 5311(f) carriers have ticketing arrangements with Greyhound and share terminals in cities where they connect. Through trips can be booked via Greyhound's web site. Some trips are designed to connect with Amtrak trains and through tickets are sold through Amtrak as part of the Amtrak Thruway program. 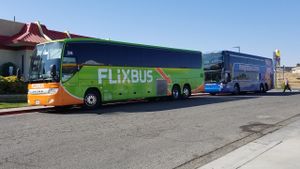 The deregulation of the intercity transportation has spawned competition between bus companies on popular city pairs, with the most notable being on the East Coast. These carriers provide direct service via the interstates with few or no stops and charge demand based pricing similar to airlines. Ticketing for low fare carries is done online and they do not have ticket agents.

Some smaller carriers offer intercity bus trips to and from major hub airports such as LAX and ORD. They may offer long term parking at their pick up locations and/or pick ups at hotel or college campus. These carriers provide a price competitive option to regional air service and direct access to airports that have more choices of airlines and destinations. 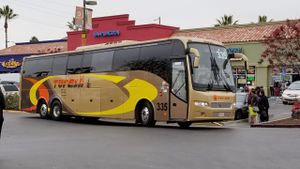 Some intercity bus carriers focus on the immigrant/farm worker market and provide service from various cities to the US/Mexico border and onward to Mexico. These carriers are either owned by the same companies or partner with companies that operate intercity buses in Mexico. These buses generally pick up from Latino owned grocery or convenience stores in the communities and have company owned terminals at major hubs in cities such as Los Angeles and Dallas. Tickets for these buses can be purchased from agents or online.

For some of the popular city pairs like Los Angeles and Las Vegas, there would be a variety of intercity bus companies of different types (mainline, express, cross border) competing with different boarding locations, onboard amenities, price points, and target clientele.