Directions to and from Richmond Station  |  Nearby 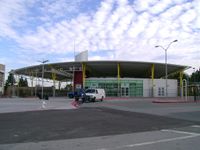 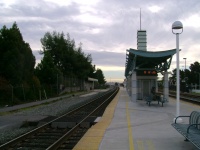 Richmond is the main transfer point between Amtrak and BART trains.

Ticket machines are available at the underground station concourse. First time riders can purchase a reusable Clipper card from a vending machine before boarding. All riders must pass through the faregates with a valid Clipper card, mobile device with (Clipper enabled) Apple Pay/Google Pay, or paper ticket (no longer sold at stations). Keep the ticket, device, or card for the ride and use it to pass through the faregates again when exiting the station.

This station features center platforms. Because it is an end station,   train to Millbrae/Daly City and   train to Fremont may depart on either track. See overhead destination sign to see which train is departing from which track.

Train tickets can be purchased from QuikTrak machines available at the underground concourse. This station features center platforms and two tracks. Trains may arrive on any track. Check with conductor for train destination prior to boarding.

To pay the daily parking fee, remember your space number, enter through the faregates into the paid area and pay at an add fare machine.

Bike racks and 24 electronic BikeLink lockers are available at this station.