The 'L' is a common name for Chicago's rapid transit system, which operates within the city of Chicago and some surrounding municipities. The system got its name because of the original elevated tracks throughout Chicago. Today, the system is consisted of some 19th century elevated lines (including the loop tracks in Downtown Chicago), ground level interurban lines, and modern subways/freeway median lines. The 'L' is the 3rd largest rail transit system in the United States.

The system is consisted 8 color coded lines. The fares and fare payment methods are the same for all rail services.

The 'L' connects with CTA and Pace buses along with Metra regional rail.

The system is consisted of 8 lines 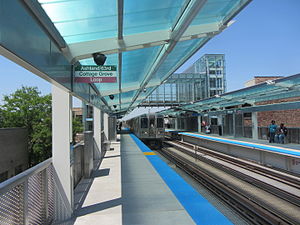 Select a station through the map above for access and parking information on individual stations.

It is important to note that there are several stations in the system have the same name, but served by different lines (and some even by the same line), located in different parts of town.

Train fare can be paid with a single use Ventra ticket or reusable Ventra card, which both are sold from vending machines available at all 'L' stations (some station entrances do not have them and they're labeled "farecard only"). Other methods include contactless bank card, or mobile devices with Apple/Samsung/Android Pay.

Riders must pass through the turnstiles with any one of those fare media by tagging the ticket/card/mobile device on the reader.

On the platform, board the train that goes to your station. The headsign on the vehicle will show the color and destination. On the train, announcements will be made for the next station.

Bicycles can be taken aboard the 'L' on weekends and holidays (except July 4th) at all times, and weekdays except 7am to 9am and 4pm to 6pm. Cyclists who've entered the system before these periods are permitted to complete the trip.

Cyclists should enter the system via wide-accessible swing gates. If they're not available, they should notify the customer assistants or security guard and request use of access gates. Do not attempt to go through the high barrier gates which are present at some station entrances and exits.

Cyclists may use elevators or carry the bike on stairs. They're not permitted on escalators.

Only 2 bikes per rail car. There's no bike rack onboard. Stand and hold bike near the end of the rail car.

Customer assistance buttons are located at the stationhouses (where the main turnstiles are located) and along the platforms. Assistance can be sought from the train operator by locating near the first car on the train platform. Stations also feature wide fare gates at accessible stops.

Even though the system is level boarding, wide gap can exist and a gap filler (bridge plate) may be necessary for wheelchair riders to get on and off the train.